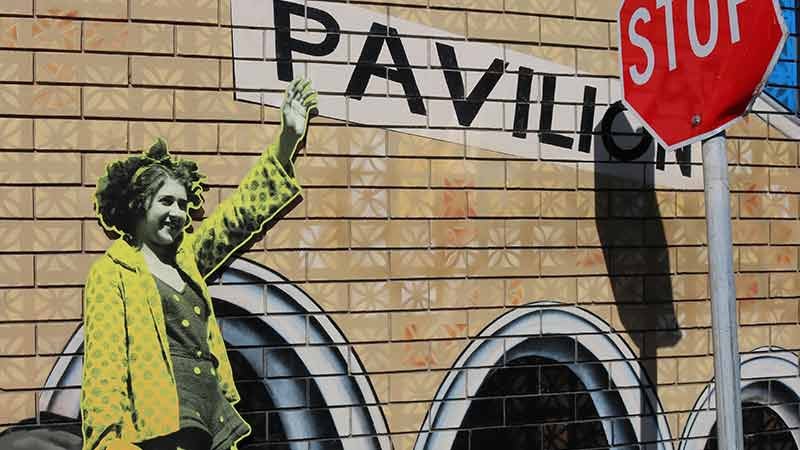 Spectacular artworks dominate the streetscape and laneways of Caloundra. Cameras at the ready!

Caloundra, located on the southern end of the Sunshine Coast, is known for its beachside culture, laid-back vibe and family feel. It’s the last place you would expect to find a laneway filled with fantastic graffiti art. However, this thriving coastal town has a few surprises up its sleeve and the ‘laneway mural trail’ is one of them.

I was in downtown Caloundra, with an hour to kill, so I decided to explore the creative laneways, starting at the top end of Bulcock Street.

This colourful, massive mural snapshots Caloundra’s cultural identity and history. The mural captures the quintessential feeling of Caloundra’s past and present through quirky colourful drawings of iconic locations, activities and events in Caloundra, such as the heritage lighthouses and Pa & Ma Bendall (surfing pioneers) alongside the Caloundra Music Festival, the mullet fishermen, the Strand building and Pumicestone Passage. The bright, bold colour scheme certainly pops off the rendered canvas, so snap away and add some colour to your Instagram page. 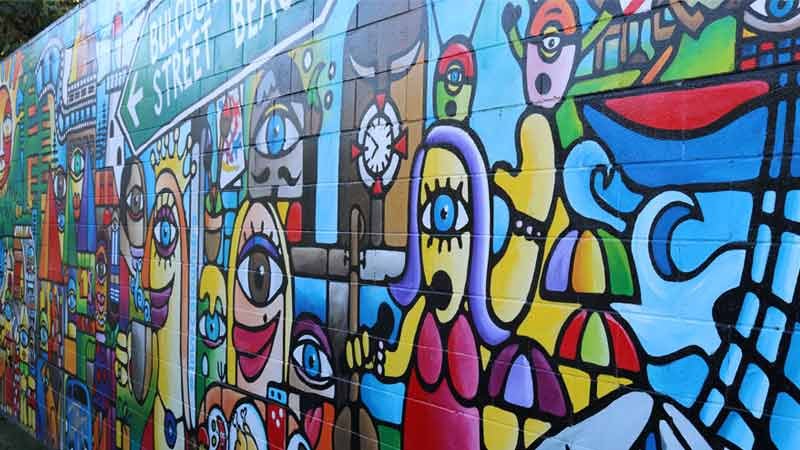 I strolled down Bulcock Street into the heart of downtown Caloundra and turned right onto a small alleyway the locals call 'Village Laneway' which connects to Lamkin Lane. This hidden laneway is not only home to the award-winning coffee emporium, Lamkin Lane, but is the second site on my mural trail and features three retro-styled murals.

The changing rooms at historic Kings Beach Bathing Pavilion are playfully captured in this quirky mural. The repurposed photograph of a female bather is modernised with splashes of fresh, neon colour. There’s a popular café onsite now, too.

Adjacent to the pavilion mural, I discovered this besser brick, Aboriginal mural. Geometric patterned besser brick was a popular building material in decades past. I love the aquatic colour scheme, the retro feel and the symbolic connection to water that speaks to Caloundra’s coastal heritage. 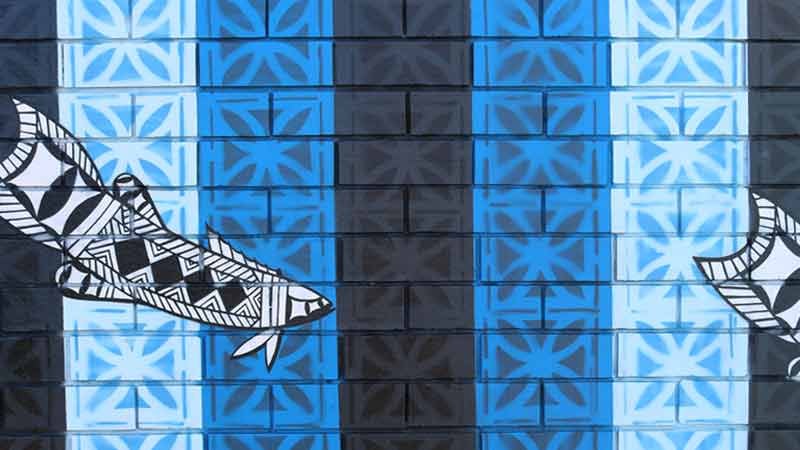 The final Lamkin Lane mural features Caloundra’s oldest lighthouse. Built in 1896, the heritage listed Lighthouse sits on the top of the ridge in Canberra Terrace facing the shipping channel through Moreton Bay. The mural is cared for by Friends of the Lighthouse and the lighthouse itself is open twice a month to the public. 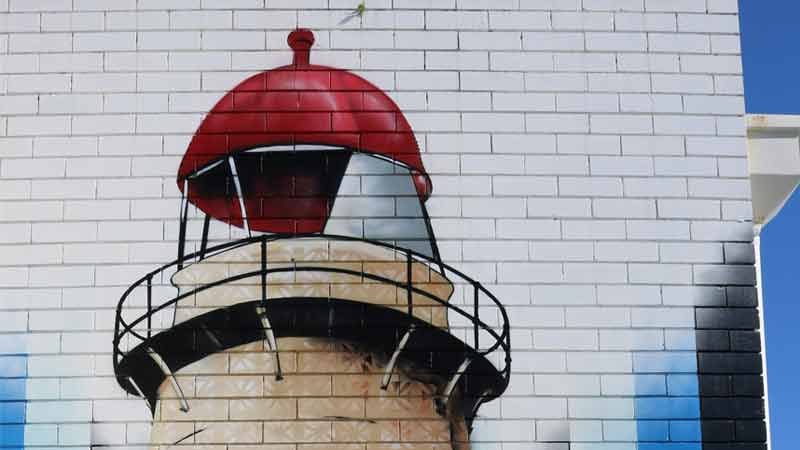 The lighthouse mural on on Lamkin Lane.

I headed back to Bulcock Street then ducked down another small alley way, affectionately monikered by locals as 'Memory Lane'. Here, the murals feature images supplied by the local Caloundra community. The patchwork art showcases the area’s connection to its coastal history, the ocean, surf lifesaving and Caloundra’s surf culture.

I set off on foot once more and headed along Memory Lane towards Williamson Lane where I discovered a larger than life mural of Caloundra’s famous surfing duo Ma and Pa Bendall. The husband and wife surfing team are an integral part of Caloundra’s surf culture and the mural is a fitting tribute to the pair. The Ma and Pa Bendall Memorial surf contest is held annually over the Easter long weekend at Moffat Beach and is the second longest running surfing competition in Australia

Moving on through Williamson Lane the murals become more modern in style capturing the revitalisation of this coastal town and its emerging cultural scene.

Williamson Lane, is also home to four oversized murals, which were created as part of the Horizon Festival of Arts and Culture 2016  by contemporary artists Fuzeillear, Thom Stuart, David Houghton and Joel Birch. The streetscape designers, part of Australia’s 'First Coat' graffiti collaboration, completely transformed some of Caloundra's walls and alleyways with eclectic street art.

Crafted by local David Houghton as part of the 2016 Block Party, the artwork transforms a nondescript wall into a memorable work of art.

So much catmosphere on Williamson Lane.

Next stop, two block print artworks brighten up the concrete laneway. The monochrome Gone with the Wind artwork makes a bold statement whilst the bright orange spots and splashes add a ‘pop’ element.

The final artwork to transform Williamson Lane is the tiger. This four metre high artwork towers over the cars and pedestrians below.

You'll find the tiger at the end of Williamson Lane.

The downtown mural trail concludes at the Caloundra Regional Gallery and I think this is definitely a case of saving the best for last. Part children’s illustration, part magical monocycle story, this creation is truly whimsical! I love the connection to the natural environment and the scale of this artwork. This mural is a result of a collaboration between Andrew Frazer (Bunbury, WA) and Kyle Hughes-Odgers (Perth, WA).

Before venturing along the laneway mural trail, I would have said that I’m not a fan of graffiti or street art. However, I loved discovering these artistic masterpieces. The murals really encapsulate Caloundra revitalisation and emerging arts scene.

The trail doesn’t stop there either. More murals can be found at the following locations around Caloundra:

To commemorate the 50 year anniversary of the naming of the Sunshine Coast, a series of murals have been installed around Kings Beach’s parks and walls. The images showcase coastal culture from the 1920s to the 1950s.

A collaboration between the local community, Unity Water and Sunshine Coast Council saw the water tower transformed into a gigantic work of art depicting native flora and fauna. 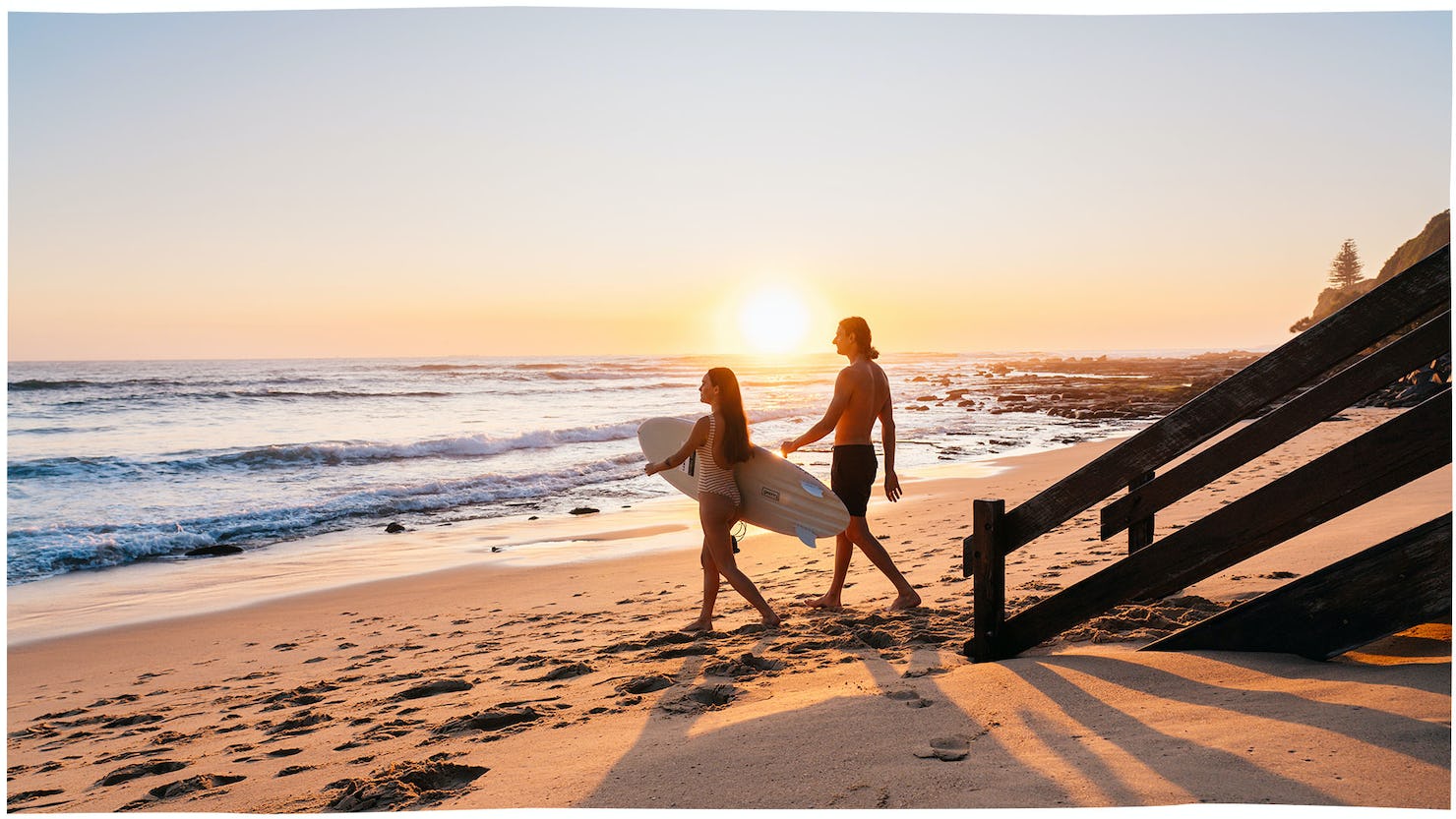