Whats new on the Sunshine Coast in 2021!

When was the last time you fell asleep under the stars? 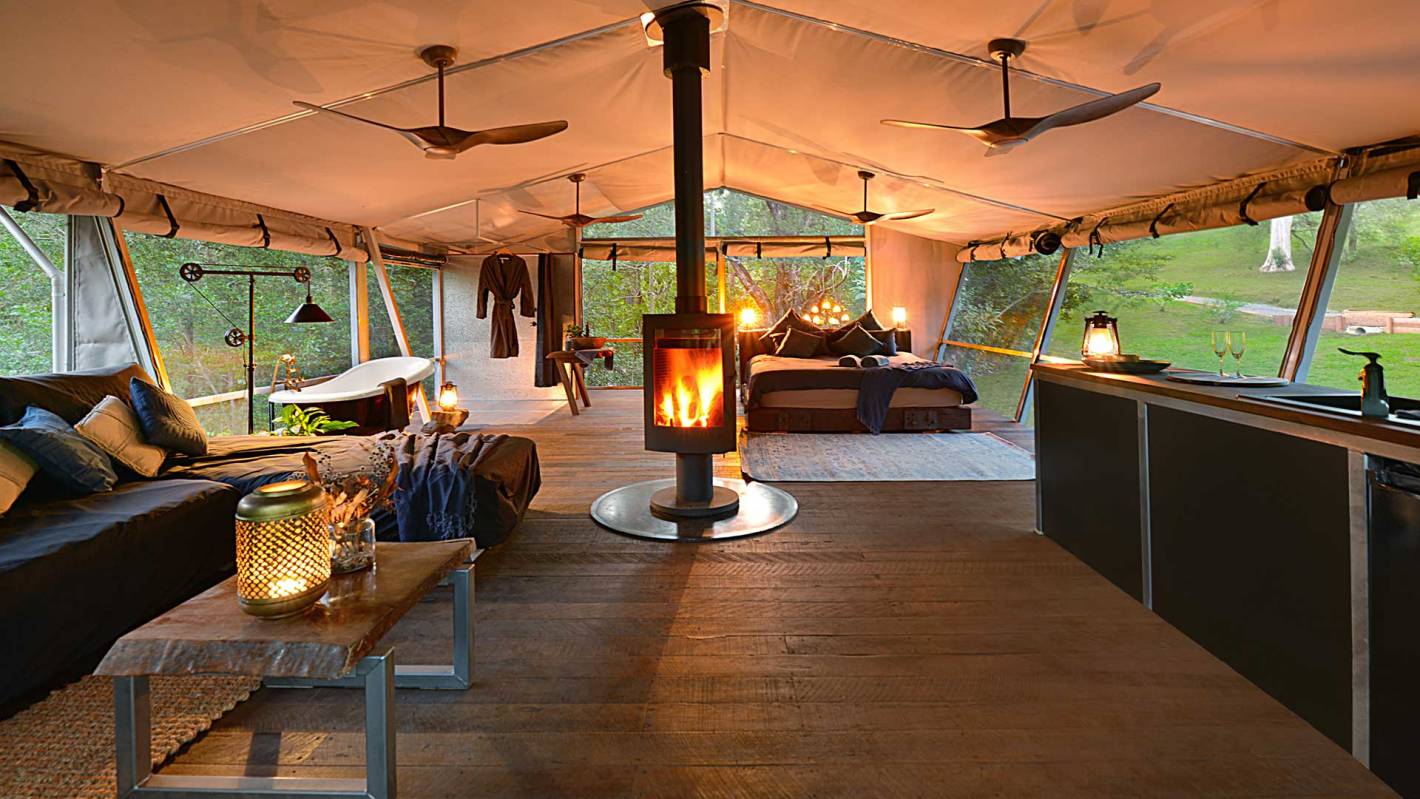 From luxury glamping to bespoke beach houses, the Sunshine Coast’s newest accommodation offerings embrace the region’s natural beauty, without skimping on the finer things in life.

Discover this, and more, with the ultimate guide to ‘What’s New’ on the Sunshine Coast in 2021.

Taste local seafood and organic produce at the region’s newest restaurants, mark your calendar for reimagined events and see the Sunshine Coast from a different perspective at the latest attractions.

Immerse yourself in the extraordinary artistic and cultural expressions of First Nations artists during Horizon Festival (27 August to 5 September 2021). Set against the spectacular backdrop of the Sunshine Coast’s natural landscape, Horizon Festival’s ten-day program is brimming with arts and cultural events for creative families, arts-lovers, and the adventurous at heart. The festival’s dedicated First Nations program will inspire and move you with events across dance, live music, film, comedy, spoken word and theatre. Dawn Awakening, the festival’s flagship First Nations event, takes place as the sun rises over the ocean at Coolum, featuring local First Nations artists in a moving ceremonial performance of remembrance, dreaming and ritual. (Free event, registration required). Horizon Festival tickets and bookings will be available from 17 June.

Adam Tomlinson’s dream started in December 2008 during a craft brewery tour in the USA and, 12 years later, came to fruition with the opening of Stalwart Brewing Company at Nambour on the Sunshine Coast. The craft brewery, based at the heritage-listed Club Hotel on Currie Street, provides a high-quality range of ales, two of which draw on his Navajo Indian and Kabi Kabi heritage. Stalwart’s core range of beers reflects Adam’s diverse ancestry: The Sacred Chief honours his great great great grandfather, a Navajo Indian from America’s mid-west who immigrated to Australia in the 1800s during the Gympie gold rush. Adam’s second commercial release The Dreamtime Warrior is a golden ale in honour of his great grandmother who was a Kabi Kabi woman from the Sunshine Coast.

Located in Kin Kin in the Noosa Hinterland, Mayan Luxe Villas offers environmentally-friendly, sustainable accommodation with sweeping views of the surrounding farmland and countryside. The two-self contained suites are constructed from rammed earth and recycled timbers including railway sleepers, old bridge timbers and timbers from the original slab hut building on Mayan Farm. The two suites accommodate up to eight guests with a central entertaining and dining pavilion. Outside there are three alfresco entertaining and dining areas, including a pizza oven and firepit overlooking the plunge pool.

Live like a local at Soul Beach House. Opened in mid-2020 at Alexandra Headland, a beachside town nestled between Mooloolaba and Maroochydore, this beautifully appointed beach house has everything you need for a relaxed getaway.  Reconnect with friends or slow down with the family with room for up to six guests across three bedrooms, organic linen a fully equipped kitchen and outdoor barbecue amidst a tropical back drop. Located just minutes’ walk from the beach, it’s the perfect base for your next Sunshine Coast escape.

A new luxe glamping retreat has opened on 17 hectares in Woombye in the foothills of the Sunshine Coast Hinterland. Centre-stage of Starry Nights are the glamping safari-style suites. Vast in size (75 square metres) and totally designed to showcase the natural setting, features include a king-size bed (with USB chargers), lounge area, kitchenette, a fireplace for cool winter nights, ensuite rain head shower and toilet, and a freestanding bathtub that makes the most of the views. A breakfast hamper of local produce is included, and guests are greeted with a welcome cheese platter with Australian organic sparkling wine.

Rumba Beach Resort – which offers uninterrupted views over the sparkling Pumicestone Passage in Caloundra – recently unveiled their newly upgraded Lagoon and Jacuzzi Spa pools, including a luxury poolside bar. Resort General Manager Craig Schiller said the major renovations took place over the last six months to completely rejuvenate the lagoon and jacuzzi spa areas. “The pool area and surrounds were waterproofed and the pools completely re-tiled. The result is an impressive pool and spa with the luxury of a poolside bar,” he said.

SEA LIFE Sunshine Coast is launching a second Penguin Encounter in February 2021. The new experience will give you the opportunity to stand in the water and hand feed the Little Blue Penguins while they swim around your legs! The encounter is available for guests aged 13+ and includes a behind the scenes tour of the penguin zone. SEA LIFE Sunshine Coast has also brought back their exhilarating Dive Shark Xtreme experience as part of their Summer of Sharks campaign!

Rainbow Beach Horse Rides is partnering with country music legend Tania Kernaghan for a new five-day riding experience. The tour will operate twice in May and again in August, inviting riders to explore the region on horseback in the day, before retiring to their glamping-style accommodation at night for chef prepared meals and singing around the campfire. Rainbow Beach Horse Rides has also partnered with Rainbow Beach Helicopters for the ultimate romance package. Enjoy a horseback ride, before taking the chopper to the summit of Mount Goomboorian for a marriage proposals or special occasion, a sumptuous picnic included. To find out more, email info@rbhr.com.au or phone 0412 174 337.

Iconic tourism operator Aquaduck has made its debut splash in Mooloolaba. The amphibious Aquaduck has been operating since 1996 and has now expanded operations to include the Sunshine Coast with 1-hour sightseeing tours exploring Mooloolaba and the Mooloolah River. The tour takes visitors along the picturesque Mooloolaba Esplanade before splashing in for a cruise through the canals and waterways. Journey past Point Cartwright, the popular Mooloolaba fish markets and the glamorous mansions of Minyama Island. While on board, the tour guide and Aquaduck Captain will share stories featuring the history of the region including those from the original owners, beach culture, local produce and wildlife.

Fly 20 metres above the ground on new ropes course

You can now zipline through Sunshine Plaza on Australia’s highest ropes course – Next Level. The course is built above Cornmeal Creek which runs through the centre of the shopping complex and includes seven circuits across four levels of difficulty, including 145 aerial obstacles. The course has more than one kilometre of zip lines, the longest of which spans 135 metres. Guests can also access a 22-metre-high viewing platform that offers impressive 360-degree views of the Sunshine Coast which can be done as a separate activity to the high ropes.

Since it opened at The Wharf Mooloolaba, Rice Boi has taken the Sunshine Coast’s culinary scene by storm. Its Asian street food inspired menu has diners lining up night-after-night, so it’s hardly surprising owner Tony Kelly has taken the business to the next step and opened a sister restaurant, Giddy Geisha, in the new Maroochydore CBD. Giddy Geisha opened in late December 2020 and offers the same Asian street food inspired cuisine with a new menu to please diners. If fine dining is more your thing, try the new Market Bistro restaurant opened next door. Another venue by Tony Kelly, this restaurant is a quintessential European style bistro offering an enviable a la carte menu.

Sample local seafood at The Nautical

Opened in January 2021, the Nautical on Maroochydore’s iconic Ocean Street plates up the freshest local seafood, paired with local brews. On the menu you’ll find Mooloolaba King Prawn Rolls, local King Fish sashimi, Moreton Bay Bug salad and share plates of local sand crab. With a range of locally brewed beers on tap, it’s the perfect venue to while away an afternoon.

Buderim Ginger has released a limited-edition dry gin available exclusively at The Ginger Factory in Yandina. Their first-ever gin product is a smooth textured, refreshing spirit made with hints of Buderim Ginger, a flavour synonymous with the Sunshine Coast. The 700ml bottle is produced in partnership with Brisbane based distillery, Early Days.

Enjoy a festival every weekend at NightQuarter

The Sunshine Coast’s newest entertainment precinct, NightQuarter, has taken the region by storm with their delicious street-eats, vibrant atmosphere and weekly entertainment. As well as a rotating schedule of live music acts, NightQuarter also boasts an all-new line-up of dinner and show spectaculars held on Thursday nights. Shows include Aussie music’s favourite Ian ‘Dicko’ Dickson in Dicko’s Country Spit Roast series which promises a carnival of twang, drag queens and barbecue dinner. From February 4 the series heats up with the Kingdom Sensation Burlesque Spectacular taking over the industrial shipping container stage, and on 15 April, Behind the Drag takes you on a journey of self-discovery with epic lip synchs and glittery dance numbers. NightQuarter is open every Friday and Saturday and Sunday’s once a month.