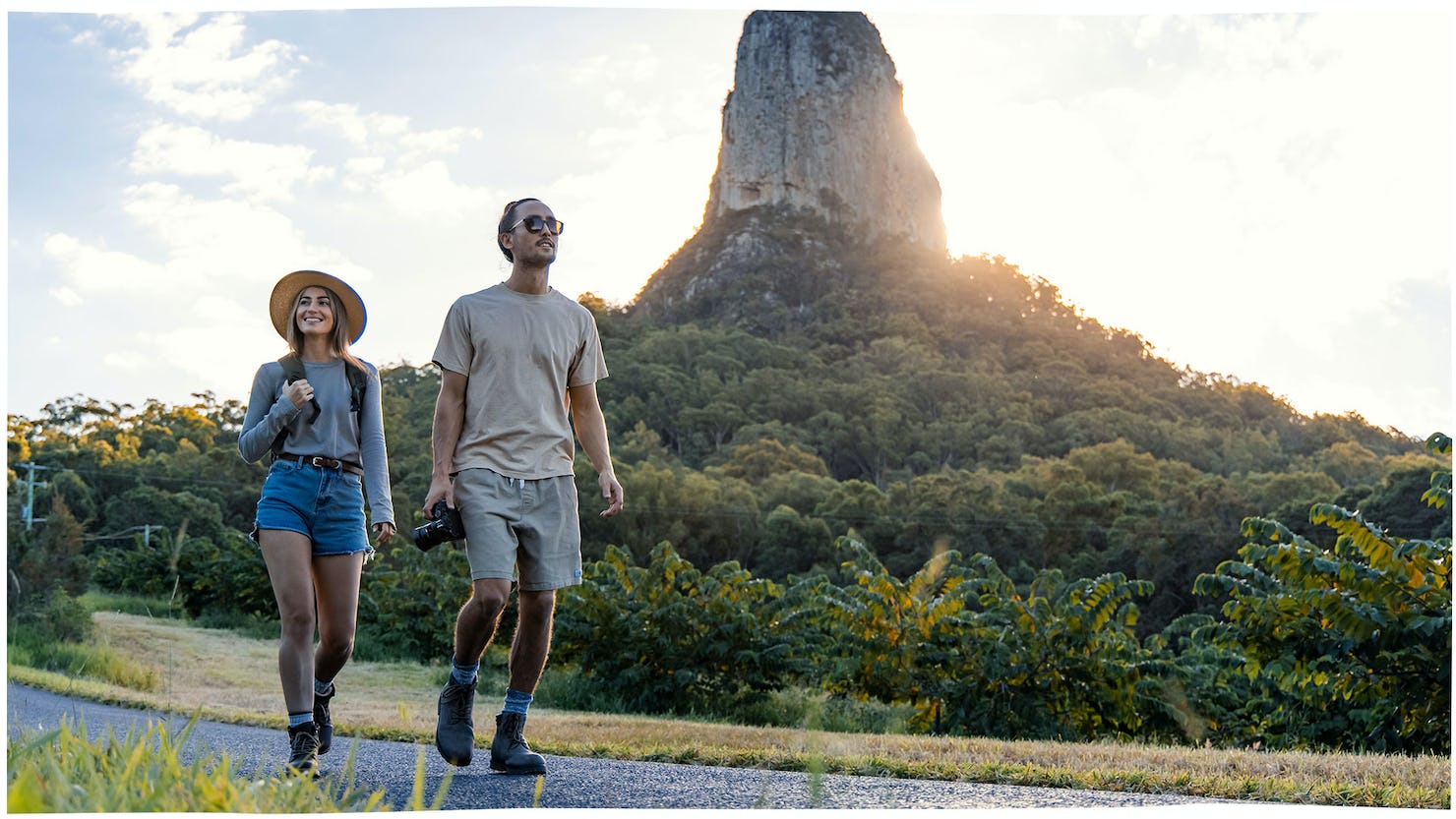 Its striking features include the Glass House Mountains which were formed more than 25 million years ago, though it’s fair to say the view of these 11 ancient peaks is one that never gets old.

From here you can hit the road and make your way up the Blackall Range, a landscape formed by volcanoes and sculpted by water over millions of years, creating a landscape that exudes beauty from the rainforests to the rushing waterfalls.

The Hinterland is also a place of cultural significance for the traditional owners of the Sunshine Coast - the Kabi Kabi and Jinibara peoples - with several sites still considered sacred today.

A visit here will see you reconnect with nature and learn more about the millions of years of history that make the Sunshine Coast Hinterland, and your journey of discovery starts here.

More than 25 million years ago on the southern end of the Sunshine Coast, dome-like plugs of magma forced their way through the surrounding rocks to form the 11 spectacular peaks that up make the Glass House Mountains.

Today the ancient peaks tower over a green and gold patchwork of pineapple plantations, cultivated fields and native forest, with many of the peaks protected as part of the Glass House Mountains National Park.

Long before white settlement and Captain Cook’s naming of the Glass House Mountains in 1770, the region was a special meeting place for the Traditional Owners of the Sunshine
Coast, the Kabi Kabi and Jinibara peoples, to gather for ceremonies and social activities.

Events were planned for times of the year when local food sources were abundant, like the bunya nut festival, and the Glass House Mountains remain a place of spiritual significance – with several sites still considered sacred. 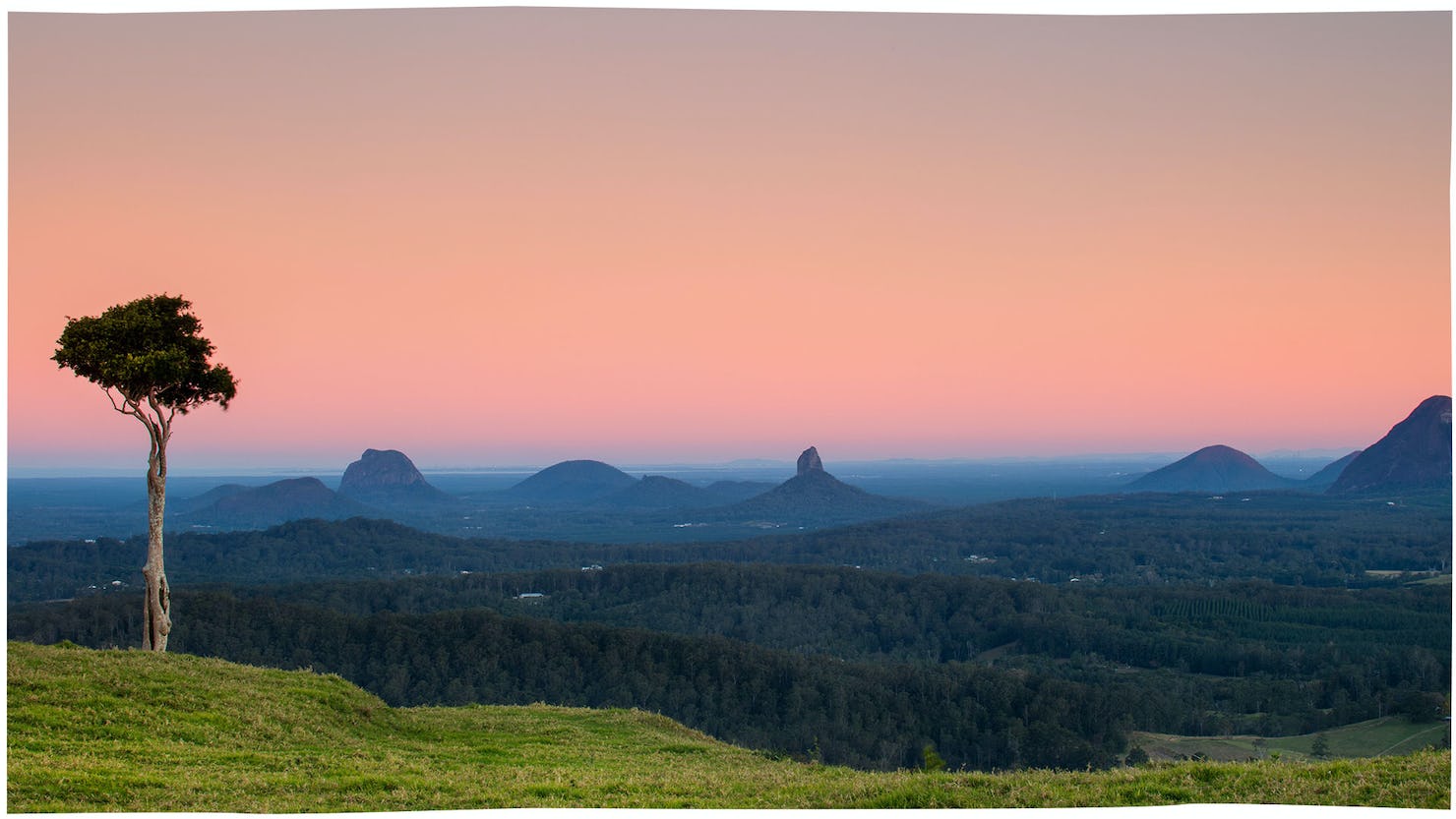 Sunset From One Tree Hill, Maleny

Explore the region by car (making sure to stop in at some of the roadside produce stalls and the Glass House Mountains Lookout), take a bushwalk or hit the mountain biking trails to truly immerse yourself in nature. 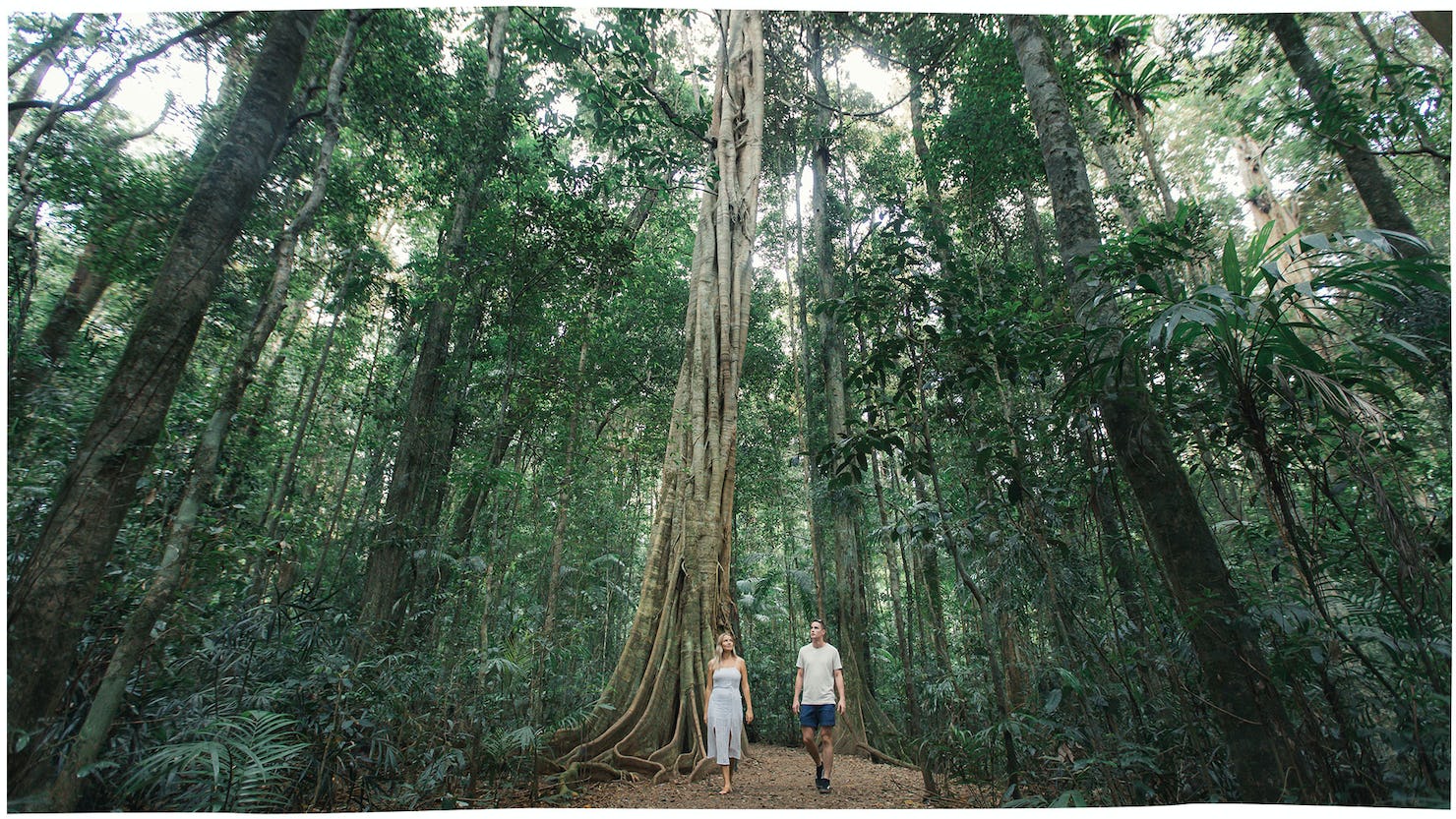 Mary Cairncross Scenic Reserve is a living museum of the diverse plant and animal life that call the Blackall Range home.

Made up of 55 hectares of subtropical rainforest with sweeping views of the Glass House Mountains below, the reserve invites you to explore the Rainforest Discovery Centre, where you can learn more about the region’s Indigenous history and natural surrounds.

From there, set out under the cool canopy of the rainforest tofollow one of their hiking trails.

Make sure to keep an eye out for some of the 141 species of native birds that reside in the reserve, including noisy pita, whipbirds, paradise riflebird and regent bowerbirds.

The cool dense forest is also home to shy but ever so cute pademelons and wallabies, spiny crayfish, frogs, threatened native butterflies and endangered amphibians and lizards.

The walk will undoubtedly make you work up an appetite, so on your way out, stop into the Mountain View Café for a coffee and cake or lunch with a view.

Think of the national parks of the Blackall Range as the Sunshine Coast’s leafy backyard.

The landscape here was created by volcanoes and sculpted by water over millions of years, and this ancient beauty can be seen everywhere from the majestic waterfalls to the tall eucalypts and lush rainforest.

Start your journey at Kondalilla National Park, which is part of the traditional lands of the Kabi Kabi peoples. 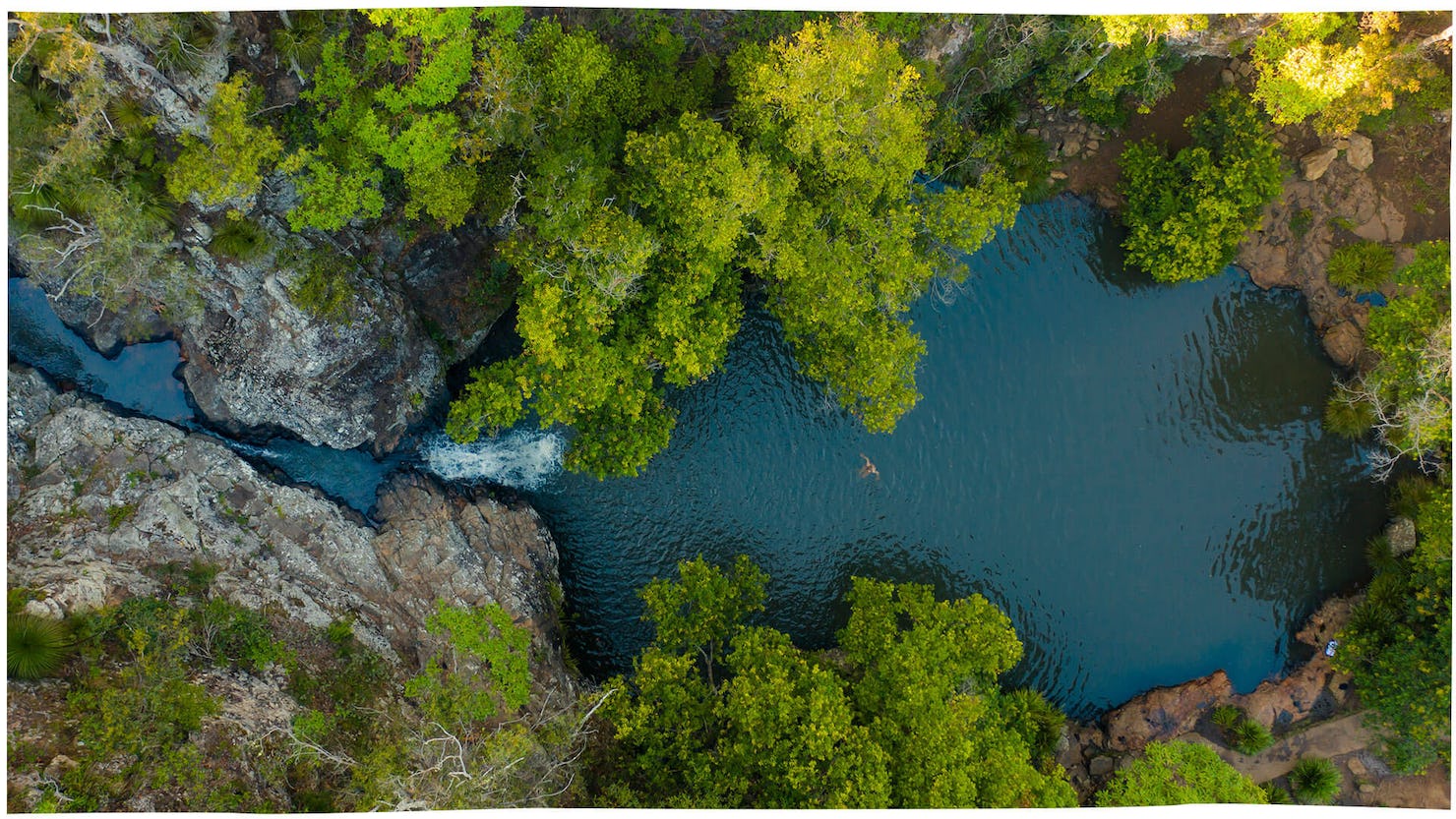 The name Kondalilla comes from the Aboriginal word meaning ‘rushing waters’ and the breathtaking waterfall that drops 90m over Skene Creek certainly lives up to its name.

High above the Obi Obi Gorge and Mary River Valley, the Mapleton Falls Lookout provides stunning views of the 120m drop of the falls and verdant valley below.

One of the best ways to explore the National Parks is on foot, with the Sunshine Coast Hinterland Great Walk winding its way through all three.

The four-day journey spans 58.8km with places to camp along the way, or if you don’t want to give up life’s creature comforts, book the Great Walk package at Narrows Escape Rainforest Retreat who take you on guided walks during the day, with chef prepared meals and luxury cottages to sleep at night. 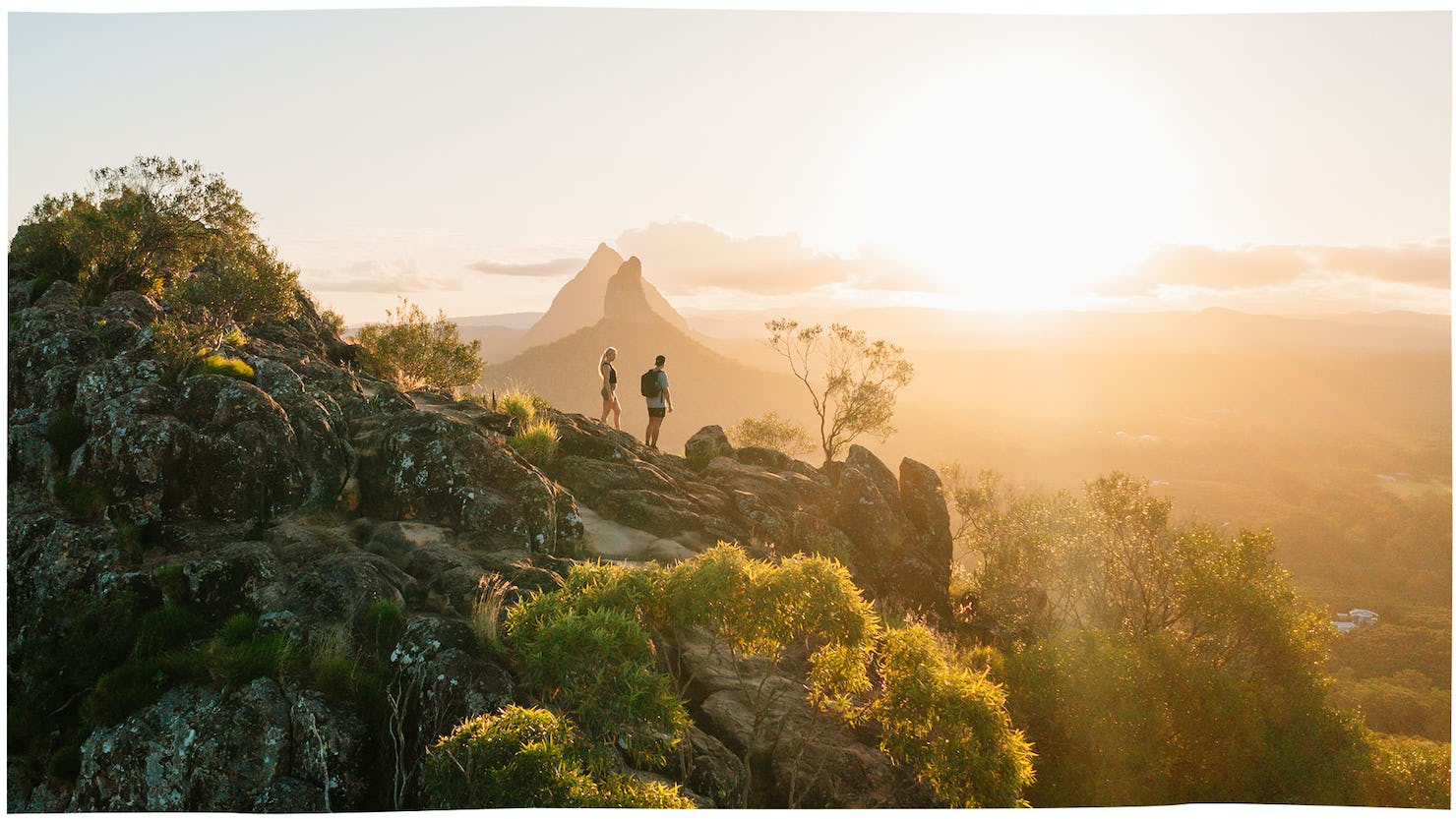 The Glass House Mountains are an awe-inspiring landscape. Let the magic wash over you as you take a leisurely drive thro...